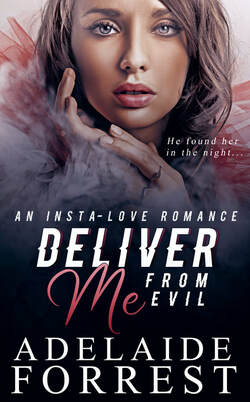 ​Deliver Me From Evil: An Insta-Love Novella
by Adelaide Forrest
Deliverance
I ran in the night, fleeing my husband and the community that raised me and betrayed me. Battered and bruised, with only my bare feet to carry me through the forest and down Mount Awe, eventually exhaustion claims me.
I wake in a bed that’s not my own two days later with no recollection of how I got there. Anderson is sweet but stern. Handsome but rugged. He’s everything I never knew existed, but I can’t stay.
Not even for him.
Anderson
I found her in the night, broken and huddled against a tree for safety while she slept. Taking her back to my cabin came easy. Letting her go is impossible.
Her innocent grey eyes call to the beast inside me that’s desperate to claim her as my own. Her past wants to take her away from me, but nothing will stand in my way of keeping Del.
Not even her own fears.

Claiming His Princess (Kings of Conquest #1)
​Coming September
by Adelaide Forrest & Lyric Cox
Most of my life is spent in service to my Kingdom and my people, despite how the tabloids try to portray me as a hard and cruel ruler.
Then I’m forced to host the Annual Gathering of Eligible Royals and socializing with Princesses to find my future wife becomes my newest duty. I want nothing to do with any of them or the contractual marriages that bind Countries to one another.
Until the moment I first see Princess Alina of Lantis.
The endearingly awkward princess has spent all her life locked away in her palace so that her mother can use the secret of her beauty to her advantage and arrange a marriage to King Corbin. If I was anyone else, Alina would be bound to him by the treaty between our realms.
But as the King of Oshal, he’s only a minor detail for me. A blip in the road I’ll take to make her mine.
​And nobody will stand in my way. 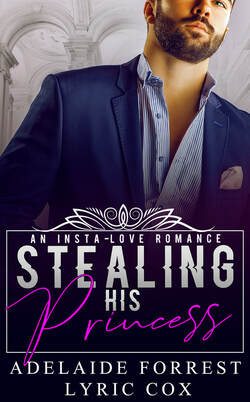 Stealing His Princess (Kings of Conquest #2)
by Adelaide Forrest & Lyric Cox
I live my life with only one purpose: to do what is right for my Kingdom of Lantis. Everything else is secondary to that goal.
But there’s one person who threatens all my carefully maintained control. One who could tempt me to risk everything I’ve worked to build, just to feel the touch of her lips on mine. Being forced to occupy the Palace at Oshal for the Annual Gathering of Eligible Royals brings all that temptation to the surface and makes the risks seem worth the consequences.
But Princess Bristol of Theodosia isn’t only out of my league and from a Kingdom wealthier than my own.
She’s betrothed to my closest friend.